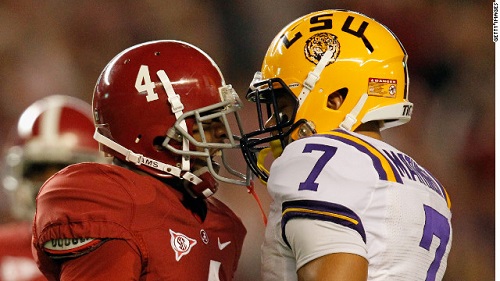 It is now November, which means LSU vs Alabama. We can all agree that this is the most important game of the season. Not only because we are bitter rivals and they’ve beat us year in and year out for six years, but also because they are the biggest stumbling block between us and the SEC championship, and possibly the national championship.

Alabama has beaten us every single year since the 2011 national championship, when they beat us 21-0 after we had beat them in the regular season 9-6. That’s when the bad blood started, and ever since they have been our bitterest rival. Itgets bigger every year.

Their current six year win streak against us is something they haven’t done to us since they beat us eleven times in a row under Bear Bryant. Some were close games that we should have won. In 2014, we had a lead and with less than two minutes left when Alabama drove down the field and tied it with a touchdown. They went on to beat us in overtime which left many fans heartbroken and made the rivalry even bigger.

There were also games (too many in fact) where Alabama completely demolished us. They usually brought us down with their harsh defense. In fact, our offense has not scored more than 17 points for seven years straight. Even in our best offensive years with OBJ, Jarvis Landry, Jeremy Hill, and Zach Mettenberger, we couldn’t score enough to win.

Last year, we managed to hold their offense scoreless throughout the first three quarters. The last time Alabama went scoreless was in 2007 (Nick Saban’s first year at Alabama). They scored ten points in the 4th quarter and we stayed scoreless for the first time since 2014, which was the only thing that mattered in the end.

LSU fans have the Alabama game circled every year, hoping this might be the year we end the losing streak. Hopefully our defense can do exactly what it did last time, but this time our new offense, led by Matt Canad,a can put some points on the board. We don’t need many points since this will probably be a defensive battle like last year. Alabama lost almost all their defensive superstars and a good chunk of their offensive leaders, but that seems to happen every year and they just bring in a new crop of superstars.

So will this be our year to get back on the winning track? Maybe Danny Etling will be the first quarterback to bring us a win vs. Alabama since Jordan Jefferson. If that happens, then more good things could be in store for LSU. Perhaps an SEC or even a national championship.