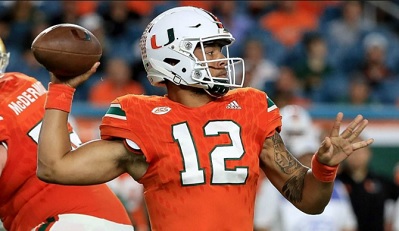 Hello Tiger fans! With spring football not quite underway and the blur of signing day finally settling, I figured that it would be a picture-perfect time to dissect LSU’s 2018 schedule. The good news is that a challenging schedule will get LSU into the picture quickly. The bad news is that it is going to be a tough ride this year.

Today we’ll start with the season opener against the Miami Hurricanes. LSU hasn’t had a first-game like this in a while.

At the start of this past season, Miami was 10-0 and headed towards the playoff with junior quarterback Malik Rosier leading the charge. That was until there season took a drastic turn. They lost their season closer, division championship, and bowl game as they slowly sunk to the bottom of their despair.

They’ll be looking for another run at the playoffs with senior quarterback Malik Rosier (or talented sophomore N’Kosi Perry), a mean defensive line, a 2018 class that ranked eighth in the nation (according to 247 sports), and bad intentions for anyone who gets in their way.

Although, I dare say they have their weaknesses and those were exposed against top tier talent.

Let’s take a closer look at their final game against Wisconsin. They lost 24 to Wisconsin’s  34, but more than that the Hurricanes two suspected weaknesses were exposed. BIG TIME.  The secondary was picked apart by Alex Hornibrook who threw for 258 yards and four touchdowns. Rosier threw three interceptions. Remember, this Wisconsin defense is running the same defensive scheme (3-4) that Aranda instituted in 2013. If they can shut down Miami, then LSU’s defense should be able to as well.

LSU’s Myles Brennan is the perfect man for this game. For one, he’s a great pocket passer and will take no time in displaying the flaws of this young secondary. Our offensive line, which is predicted to be very strong this year, is the perfect match for Miami’s Herculean defensive line who led the nation in sacks last year.

There isn’t a better game to test out a new spread formation playstyle against a top tier opponent. As for the rush game, for the first time in a long time it won’t be the biggest factor. Even so, I’m not so worried about a rush defense that handed out 145.8 yards per game last year. Considering they only signed one linebacker, I don’t see things changing.

LSU will most likely play their safeties extra close for this matchup because of the need for support in the secondary and also pressure Rosier’s biggest weakness: throwing the deep ball accurately.

If the third biggest 2018 running back prospect (according to 247 sports), Lorenzo Lingard, pans out, he could pilot veteran army Travis Homer and the dual-threat quarterback Rosier to one of the strongest rush attacks in the nation. So, look for at least eight people in the box. Still, our defensive backs need to play up in pass coverage and expose Rosier’s inconsistency. Dave Aranda has probably already sorted out every bit of this.

I think this will be a win for the Tigers if we come with intentions. This game will give us a jumpstart on the season and we won’t look back!