There are so many reasons I look forward to this time of year. Football brings community, joy, and anticipation like no other sport. The game’s strategy requires a level of study and preparation that keeps me thinking throughout the season. 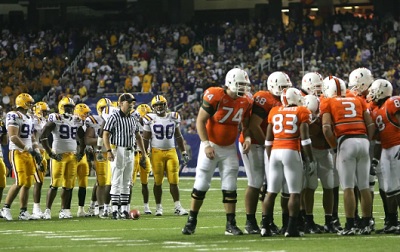 This is a tough season opener, no doubt about it. In the recent preseason top 25, Miami came in at No. 8 (one of the four teams inside the top ten on LSU’s schedule). They are getting what they deserve as far as hype goes, but for some reason that gives me a good feeling. Coach O should be excited. From a coaching perspective, starting the season as an underdog is one way to make sure your players play with a chip on their shoulder. The last time LSU played a power 5 team ranked behind them with a head full of air was Wisconsin, and we know how that ended for us. It’s not a bad thing to flip positions in the food chain.

Which team will control the turnover margin will make a huge difference in the outcome. Miami is known for forcing turnovers as well as the golden “turnover chain” chain the defensive player credited with it wears on the sideline. Miami’s Jaquan Johnson is as talented as Greedy Williams but if Greedy gets Greedy then he will outplay this opposing NFL prospect. Miami has another stud corner in Michael Jackson (not a Freudian slip), but, again, LSU has a man who could easily run (or moonwalk) with Jackson in KRISTIAN FULTON (for those who haven’t heard the big news, HE’S BACK). Now given the fact that Miami was sacked 11 times between Clemson, Pitt, and Wisconsin and the fact that Malik Rosier threw three interceptions against Wisconsin, I think LSU can handle the Miami passing game.HH.. Especially with the penetration this year’s defensive line will get. I’m predicting a 2-1 or 3-2 turnover margin with LSU as the winner.

Miami will try to beat us on the ground but that’s like running into the mouth of a lion. They might never get a first down. Dave Aranda will stack the box in the beginning, forcing Malik Rosier to throw. We need to carefully expose their inconsistencies in the pass game. We can’t overplay the run and get beat easily over the top. If we control the run game and bait them into passing while still challenging Rosier’s arm and brain. we will stay in the game with our defense alone.

There are a lot of unanswered questions on offense. This is the ultimate debut for our spread offense, Joe Burrow, and our new group of receivers waiting to grab some attention. Ball control is our top priority because, one interception can flip the scoreboard. Miami is a sizeable challenge for our spread, but if we keep them disciplined in the rush game there will be just enough give from Miami to move down the field.

This isn’t the most opportunistic matchup for an unproven offense. We just have to do the grueling work of fans: keep trusting and hoping in our beloved team. GEAUX TIGERS!!!