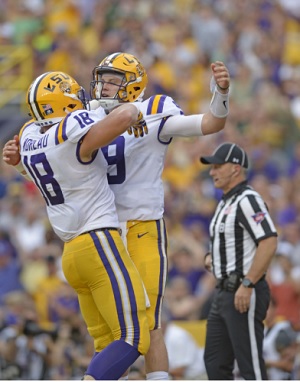 Hello Tiger fans! It’s hard to focus on this upcoming matchup with Louisiana Tech when that Auburn game is still in my day dreams.

The key to this game is simply to repeat the intensity and focus that we’ve played with against Auburn and Miami. We can’t go into the game thinking that if we beat Auburn last week, this game will just fall into place. This is a very dangerous game. We’ve learned our lessons before; we don’t need or want to re-learn them.

On a different note, I won’t sugarcoat this post into a mock-up for Louisiana Tech. They are definitely not on our level and this game shouldn’t even be close, but those games are the most likely to go wrong. Even if going wrong still means a 31-0 win.

It feels overbearing to point out improvements we need to make from Auburn to LA Tech, but there are a couple, as always, that should be noted before we get into the real meat of SEC play. There is always a chance to be a better team.

Joe Burrow is a lot more accurate than it looks on paper. He throws the slants and flats perfectly, which was why we could move down the field against Auburn. He doesn’t take many sacks and he protects the ball. He has a quick release and good pocket presence. All those things are obvious on film, but there is one throw that I would like to see him improve upon against an easier opponent, and that is his deep, and intermediate sideline throws. It’s not terribly inconsistent but a few times on critical plays when he turns and sees an open guy on the sideline he rushes his release and overthrows it or underthrows it, missing a possible touchdown. If I could see him continue to drive us down the field with his perfect short throws and complete a few sideline passes for gains, I would be even happier.

Also, our rush defense, understandably, got tired midway through the second quarter, which is the reason why halftime exist, and probably won’t happen against an FCS team. Other than that, after a really well-played game by LSU, we are looking to keep the standard that we set. Don’t take that as a compliment. Play hard, keep the standard, WIN!