LSU’s Schedule: the Easy, the Hard, and the Traps

With spring practice over and a long summer ahead, its time to take a deep dive into the schedule for the upcoming season. And surprisingly the road looks a little less bumpy for a battle worn SEC west team like us. (I’ve color-coded the schedule to easy, hard, trap game)

Georgia Southern (Easy)- The first game of the year is hard to underestimate and it should be a huge coming out party for a new LSU program. This is the easiest opening opponent we’ve been given in years, but be careful not to look ahead at the early date with us at Texas.

Texas (Hard)- Texas is hot off their best season in a while, with upsets over Oklahoma and Georgia. And you better believe there will be lots of awkward questions about the head coaching job at LSU that came down to Tom Herman (now Texas head coach) and Ed Orgeron.

Vanderbilt (Easy)- It might be a huge downgrade to Georgia last year but new powerhouses are constantly emerging in the SEC East. Whatever the case, it’ll be a great way to open SEC play.

Utah St. (Easy)- This should cap off a nice win streak going into the beef of our schedule.

Florida (Hard)- With Dan Mullen on the sideline, Florida has been on the rise and it would be horrible to underestimate them and their defense again. We can’t lose our sixth game of the season to the Gators two years in a row.

Miss. St. (Trap Game) – Mississippi State may be less dangerous, but we need to be ready because they often play up to big teams like us and we don’t want to get caught looking ahead at Auburn and Alabama.

Auburn (Hard)- This is always a really big game and this year its in Tiger stadium. It should be a blast. Unless, we get beat again by a quick offense and a solid defense.

Alabama (HARD)- Here we go, the most important game of the year. We either win and go to the SEC championship or lose this one and go home. We saw what Clemson was able to do with a versatile offense and an invincible defensive line. Hopefully, we can mimic that and get our first ‘W’ against Alabama in seven years. In my lifetime as a LSU fan, I have never seen it happen.

Ole Miss (Easy)- Ole Miss really hasn’t been the same since the Hugh Freeze incident. They may be doing better for themselves, but I can’t help feeling for their bad luck. 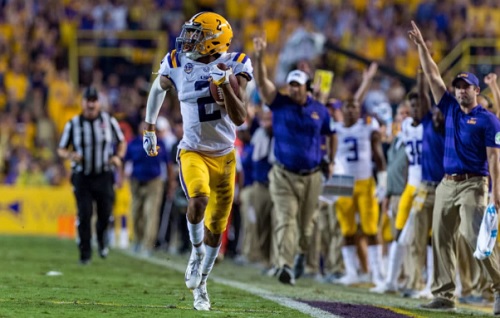 Arkansas (Easy)- Arkansas is another team that has sat at the bottom of the SEC west for a few years, but they have their strengths (as we saw last year) and we need to keep our arm steady in the second to last game of the season.

Texas A&M (Hard)- We lost this one last year by giving them a lead in the first half and then every little thing went their way in the second half for a miracle win and a grievous last game. I want this game to be more like two years ago when we carried Les Miles off the field. If we establish an early run game and confuse them with our quick hitting RPO, that might be the case.

One last thing: As Joe Alleva steps down, Scott Woodward steps up as the new athletics director which means a lot for the football program as it moves forward and leaves any trace of its past in the dust. Alleva was the last connection to the old Miles area and Woodward is the last piece of a very new LSU.