Battle for the Boot! 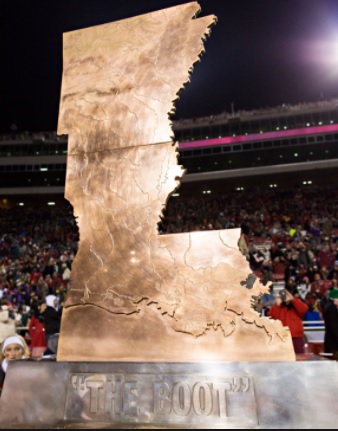 Hello Tiger fans! It’s time to pick our heads up and show the nation what defines us. LSU is as inspired as ever after a frustrating loss to Alabama. We can hand our next three SEC opponents a blowout and put the Tigers back in the thoughts of college football fans as the season comes to an end. Let’s bounce back and end with a boom!

Our next opponent is a 4-6 Arkansas team lead by head coach Bret Bielema. He is on the hot seat and probably waiting to get fired as soon as the season is over. This Razorback team has lost all pride in their work and are waving white flags at our hungry Tigers. This is a golden opportunity to let out all of our anger that is building up after a loss to Alabama.

In the final minutes of our game in Bryant-Denny stadium, Coach O sent in Myles Brennan because Etling wasn’t getting it done. What does this mean for the rest of the season? Obviously, LSU has confidence that Brennan can be put in tough situations. Now that we are out of the thicket it wouldn’t hurt to give him as many reps as we can this season to get him ready for the next three years. If he starts taking control of the field and is putting the ball where it needs to be, don’t expect him to come out any time soon.

Against an Arkansas defense that gives up 32.5 points per game we can expect a peaking LSU offense to run up the score board. Maybe big plays will be reinforced after their absence in Tuscaloosa. I know that Derrius Guice and Darrel Williams along with our wide receivers will take care of the rushing game. I also want to see Etling or Brennan killing them with 15-yard throws to make our offense unstoppable. Maybe we’ll see more of that Darrel Williams Wild Cat formation or other Matt Canada witchcraft. Let’s exploit their weaknesses and put up big offensive numbers.

Our defense can shut them out if we play smart and angry. Our corners can help out with coverage sacks and some aggressive interceptions to get into their quarterback’s head. Let’s create turnovers and take the game early. Our defense gave Alabama their lowest score all year and if we play as hard as we did last week (especially Arden Key) we will demolish them.
This is a mean rivalry for LSU but if our Tigers play hard today we’ll be in the talk for some big bowl games.
Geaux Tigers!