After the wake-up call

Hello Tiger fans! It’s time to stop dwelling on the past and move on to LSU’s next opponent: Syracuse, a power five opponent that could pose a threat. I expect our Tigers to play angry versus Syracuse. Mississippi State was a great wake up call. Now that LSU knows they are not unstoppable, they will play hard from the beginning. 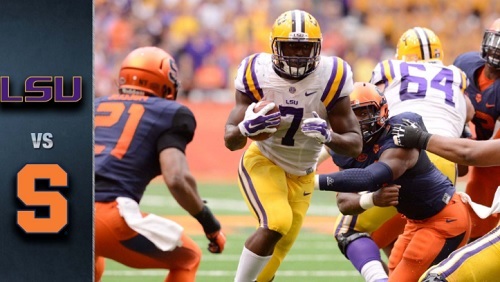 While they are no Mississippi State, Syracuse is not a knock-off team like Chattanooga. They are an ACC opponent that should be taken seriously. The last time LSU played the Orange was not so long ago. The final score was 34-24. A convincing win, but not utter domination. It was a memorable game for LSU legend Leonard Fournette in his 2015 Heisman campaign. Fournette rushed for 244 yards and added many plays to his highlight reel. But that was then, and this is now.

Syracuse’s defense has much improved since then and will likely hold LSU to less than 34 points this time. It will take everything Danny Etling has to keep our no-interception (and no turnovers at all for that matter) streak going against some very good Syracuse defensive backs, who last week forced three interceptions and returned one for a touchdown. Syracuse has a good run defense and an athletic defensive line, but they haven’t faced anything close to Derrius Guice (who looks like will be cleared to play this week after injuring his knee a bit last Saturday).

Syracuse’s offense, much like LSU’s, is extremely run heavy. In their last game, they got over 300 rushing yards thanks to a few breakaway runs. If LSU takes away the big play we could tone this Orange offense down. Perhaps the biggest advantage Syracuse has is at quarterback. Eric Dungey is a dual threat that can get 100+ yards rushing and still pass for nearly 300 yards (which is exactly what he did versus Central Michigan last week). If LSU’s defensive backs give their wide receivers space, Dungey will make them pay.

The advantage I expect LSU to have in this game is at the line of scrimmage. Syracuse has an average offensive line at best and I hope that after getting manhandled by Mississippi State last week, our lineman can taste some sweet redemption in the trenches versus the Orange.

And I think I speak for all LSU Tiger fans when I say the area of improvement I most desperately want to see throughout this game is penalty-free football. Coach O has emphasized this to the team. I hope that we start to see some real change on Saturday.

Syracuse is not by any means one of the toughest opponents on our schedule, but we need to take them seriously. Show Syracuse that what they saw last Saturday was a fluke. Our Tigers will be fired up to shake off their performance last week. I expect a big win for LSU.