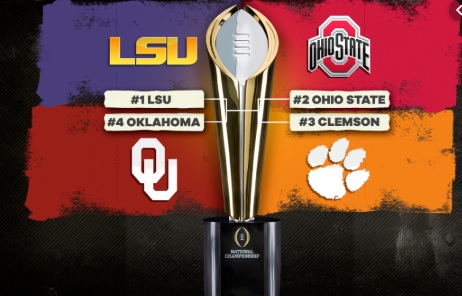 Hello Tiger fans! As the Tigers near the “final destination” the games get more and more exciting, the stakes rise higher and higher, and our performance continues to reach new levels. In years past, I dreaded big games because of the nerves, but watching this team has made LSU football fun again.

If you had to pick your poison between Trevor Lawrence, Justin Fields, and Jalen Hurts, undoubtedly, you’d take your chances on a familiar foe. A foe, Jalen Hurts, who averaged only 17 points in the previous two contests against our Tigers. The legs are dangerous and the arm is much improved since our last clash, but LSU has been playing it’s best defense and with three weeks to prepare (time we’ve never been granted before playing Hurts) Aranda is sure to cook up something good. Hurts has been inconsistent throughout the season passing the ball anywhere from 10 to 42 times with a completion rate between 52% to 94% and running the ball anywhere from 8 to 28 times per game. These Sooners struggled to put up 23 points against a Baylor defense with a nasty front that had held them to to 17 points through the first three quarters of the previous contest. They will surely have their hands full with bigs like Tyler Shelvin and Rashard Lawrence in the middle and rushers like Chaisson and Brooks on the outside.

Jalen Hurts is as lethal a passer as Tua or Ehlinger, both who threw for 400 yards against us. His most reliable weapon is Biletnikoff finalist CeDee Lamb. I can’t wait to see how he and Stingley, who is coming off a two interception game, battle it out. They don’t have as many weapons in the passing game as Alabama and we should be able to handle them enough to make Hurts do the work when he’s used to relying on the talent of Lamb.

LSU hasn’t been tested by a dual threat quarterback like Hurts this year, but I’m sure our speed in Patrick Queen, Marcel Brooks, and Jacob Phillips matches up well with. We saw in week two that the cage rushing strategy which we used to contain Sam Ehlinger has more downside than upside as it completely lacks a pass rush (a factor that killed Oklahoma last week). In Aranda’s shoes I would use my quickest most reliable athlete, Patrick Queen, as a spy and try to play Hurts one on one. If our defense really is coming alive they will have a chance to prove it against the most versatile quarterback in college football.

Even with a schedule that featured Baylor as the only ranked opponent they only won one of their last eight contests by more than one possession. In their lone loss they let up 48 points to Kansas State. They have looked much less than dominant throughout the season. If they come to Atlanta with anything less than their best football they will be sent home rather quickly.