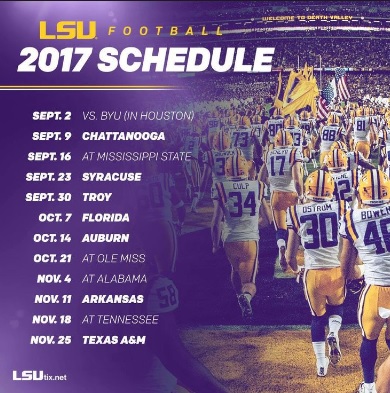 Less than 100 days until football season! For the next few weeks, I will be taking a look at our 2017 schedule and predicting how we’ll perform against each opponent. Of course, as always, I’m biased and overly optimistic so my predictions are always the absolute best scenario.

I don’t think BYU will prove to be much of a challenge, but it would be unfair to call them a no name team. They have a stingy defense known for creating turnovers and sometimes taking it to the house, but from what I saw in the spring game, after a few months to train and perfect the offense, LSU will have no problem putting together five touchdowns on their defense as long as we hold onto the ball tight and are cautious with our passes. On defense we could probably shut them out, as long as we haven’t regressed since the spring game. We’ll probably see some big plays from Derrius Guice, and some jet sweeps to D.J. Chark for big yardage, and hopefully Danny Etling can get a nice passing game going. I won’t be too surprised if Derrius Guice has a crazy 200 plus yards rushing game, but what I want to see most is a much improved passing game because you can’t beat Alabama with just a solid run game. You can’t get to the SEC championship without beating Alabama. You can’t get to the National Championship if you don’t win the SEC championship and that is the biggest of my many dreams for this season. If we can complete those ten to fifteen yard passes, than I have no doubt we can win at least 49-0 and make a strong case for the playoff in the season opener. In the spring game, our defense looked as strong as we were last season and that’s saying something since in our final game last season we held the nation’s highest scoring offensive unit and Heisman trophy winning quarterback to nine points. Once we get Arden Key back, we’ll have no problems shutting out BYU’s offense.

Game 2
LSU 49 – Chattanooga 0
Hopefully, by the second game we’ll be in sync and won’t mess with a team like Chattanooga who should be little more than fine tuning preparation for conference play. Chattanooga has a good pass defense which is good since passing was our weak link last season, and they also have an okay rush defense but they won’t be able to control Derrius Guice. They are better defensively than offensively which also could give our offense some good practice. On offense they don’t have a very good pass game, but usually have an okay rushing attack. Overall they shouldn’t be much of a challenge. After playing two no name teams we should be ready to take on the tougher opponents like Mississippi State and Auburn. As I said before, if we complete those ten to fifteen yard passes we’ll have no problem with a defense like Chattanooga’s. Derrius Guice will keep our offense in the game or win the game for us against teams like these but our run game and our defense can’t win every game for us so we had better pull our passing game together in these early games. I’m not exactly worried about either of these teams but they’ll show us how well we will do against our bigger and tougher opponents.
Less than 100 days until football season! I can’t wait!