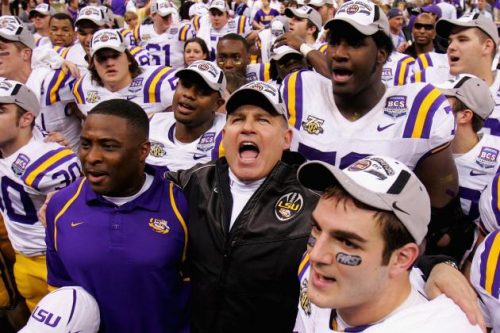 I know I am an optimist, but I do have reason to believe that we will win the college football playoff this year. I’ll prove it by comparing our key players now to our championship team in 2007.

Brandon Harris < Matt Flynn
Matt Flynn might have been a hair better than Brandon, but every year Brandon has improved. They’re both good runners and passers. Matt was great at reading the situation on the field and leading his team. Brandon has a stronger throwing arm than Matt, and nobody throws a tighter spiral, but he tends to overuse it. Brandon would throw a long bomb on first and goal, and then a tiny five yard pass on third and twenty. Matt led his team to the championship by throwing five to twenty yard passes, consistently on target. Matt also liked to spread the ball around the field on the right plays at the right time. In my mind, I see replays of him hitting a ten yard pass to a tight end or a thirty yard pass to a wide receiver on a long route. However, I have big dreams for Brandon this year. I see him hurling long bombs, but also hitting Fournette out in the flat, and maybe even sprinting around the line and diving into the end zone.

Brandon Lafell = Malachi Dupre
These guys are equally talented wide receivers. We have an amazing wide receiving corps this year, as we witnessed in the spring game, so I hope Malachi Dupre does a good job of leading them. Brandon Lafell was an outstanding wide receiver and because of his dependability he was always one of Matt Flynn’s favorite targets. They had great chemistry on the field. Lafell was fast and agile and had Velcro hands. In the pros now, he’s even a target for Tom Brady while competing with NFL stars like Julian Edelman and Danny Amendola. I remember one time I was listening to a Patriots game on the radio and I kept hearing over and over “another catch for wide receiver Brandon Lafell.” During the Mississippi State game last year, Malachi scored two back to back touchdowns in one minute. I’m looking forward to more of that.

Glenn Dorsey > Anyone on Our Defensive Line
As you may have noticed I put “Defensive Line” instead of a certain player. All of our defensive linemen are beastly, but I can’t say that one stands out more than the others. I liked what I saw in the spring game, especially Dave Aranda’s 3-4 scheme which hopefully will be difficult for opposing teams to handle. It seemed like we brought a lot of pressure with Davon Godchaux, Lewis Neal, Arden Key, and Christian LaCouture. I’m not expecting a new Glenn Dorsey to rise from this lot, but I expect a lot of pressure. And Arden Key has the chance to be our best edge rusher in years.

Glenn Dorsey went through a lot to get where he is today. He was born with clubfoot and could barely walk as a kid. He still has to wear a brace on his leg to keep it straight. Now that he’s in the NFL, he may not be a starter but I was sure to get him on my Madden team. To this day, he still holds the record as the most decorated player in LSU history.

Ali Highsmith < Kendell Beckwith
Ali was a help to the defense in 2007, but Kendell seems like more of an impact player. This is Beckwith’s senior year, and I am so glad he is still on the team as a veteran linebacker. I wouldn’t be surprised if Kendell is a first round draft pick in the NFL next year. Kendell has size, strength, speed, height, and knowledge. We are lucky to get to see him play another year. Ali was two inches shorter and 32 pounds less than Beckwith. Ali is probably faster and a bit more agile, but Beckwith is definitely bigger. I’d say they compare pretty good, and they both have some sting, but I think this year is going to be a big year for Beckwith.

Craig Steltz < Jamal Adams
No one is more aggressive than Jamal Adams. Craig Steltz might have been as good as Jamal, in terms of skills, but he lacked the swagger. I think I can safely say this year Jamal will be the leader of our defense. He has an aggressiveness that hardly anyone in the NCAA equals. I remember one time, when we were playing Texas A&M, Jamal timed a safety blitz as perfect as anything I’ve ever seen. It was about a half second after the ball was snapped and Jamal had already sacked the quarterback for a loss. The last time LSU had his kind of swagger, it was because of a little guy nicknamed the Honey Badger. Steltz was good, and Jamal still has something to prove, but I am confident that his aggression, swagger, and skill will equal championship ring. That goes for the whole team. Geaux Tigers!