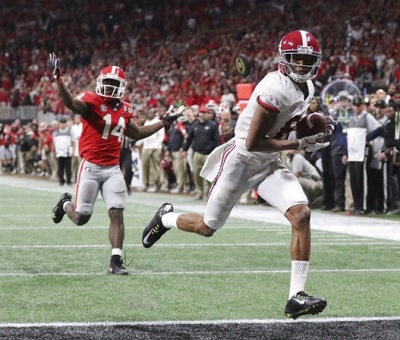 Regarding the national championship game, which I can only now bring myself to talk about, man, that one hurt. I write this as one who takes tremendous joy in watching Alabama lose. So after riding the roller coaster of that game all the way through the ups and downs, twist and turns, it felt unreal when the confetti started falling red and white just seconds after I had been jumping up and down cheering on the Georgia defense for the win. Everything happened so fast. Half of America was on their feet fist clenched, jumping up and down, screaming at their T.V. (which side they were cheering for, who knows). Then, in just one play a freshman who just a year before was enjoying his high school days in Hawaii dropped back and threw a perfect pass to Louisiana native DeVonta Smith in the end-zone. Everything collapsed so quickly. Excitement, hope, adrenaline, me, and Georgia all came crashing down like the meteor that killed the dinosaurs.

It was like a dagger in the heart to see the team, your rival, who just seems to rule their empire forever, lift another trophy. And the first half was a dream come true. All my keys to the game were executed. Georgia had already amassed 97 yards on the ground, which was already more than what Alabama usually gives up in a full game. Nick Chubb and Sony Michel were gaining yards at will, making athletic championship plays, and softening the defense for their passing attack.

Play smart at QB and get some momentum in the passing game: at the half we had 126 yards passing (40 away from Alabama’s average yards per game allowed through the air). Jake Fromm was making smart championship decisions. His receivers made pro-level catches and got open. He was picking apart Alabama’s defense and didn’t let them get into his head.

They contained Jalen Hurts on third downs when it mattered most. When you force Alabama to kick on third down five or six times you take away the magic of Jalen Hurts that strings long drives together. Georgia got to him fast enough a few times to put some jitters in his normally loose and improvised running. Make Alabama pass, in other words, and stop the rush game. The plan was strong and the execution was excellent.

In Alabama’s mellow passing performance in the first half, star wide receiver Calvin Ridley caught only one pass out of three total completions. The Bama passing game was a non-player.

In the second half panic broke loose in Mercedes-Benz stadium. Georgia must have still been reliving the half time performance as Alabama out-scored them 26-7.

On offense the Bulldog’s rushing game slowly diminished and the passing game became ineffective. An Alabama defense that was now mad, completely put a wall up to the Georgia offense.

Enter true freshman Tua Taigovailoa and the demolition became an unstoppable force. He started picking apart the Georgia secondary. Then the Bama run game got going led by a true freshman, Najee Harris, who averaged 10 yards per carry. Even Calvin Ridley came out of the shadows and made some key plays. It all made the first half look like a hoax.

Taking out Jalen Hurts, your starter with a record of 26-2, and replacing him with Tua Taigovailoa was the difference of the game. It was a high risk, high reward scenario and Bama reaped the greatest reward in college football.

Maybe next year LSU will be the ones to challenge Bama’s rule and maybe, just maybe, we can pull down that empire. Boy, will that feel good.