Greatest Team in College Football Ever 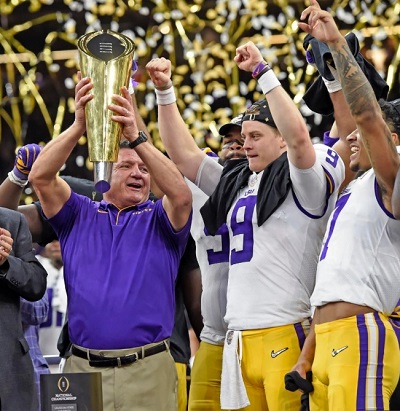 Hello Tiger fans! The Tigers just proved themselves legends in sports lore by completing one of the greatest seasons of all time. We’ve cemented ourselves into the books with a record-shattering, dominant, perfect, and downright beautiful season. We took down every competitor in college football with class. I feel like something I’ve been hoping for so long has finally come. Every LSU fan that has gone through this past decade of turmoil is completely satisfied and excited by this win that completed a goal we’ve always attained to. Things are different when you’re a champion. There is nobody you have to catch, there is nothing gnawing at you when you go to sleep at night and no matter what happens next year you will always have that feeling from winning the 2020 national championship. Every detail of this year has been seared into my memory along with that forever great feeling. I’m sure I feel just as good as the next LSU fan, Joe Burrow, Coach O, and everyone in Louisiana who let this LSU team steal a little of their heart.

All respect due to Clemson for stepping into our path and challenging us. They did fight us for a long time. They threw it all at us to try to hang with Joe Burrow, but nobody can hang forever with this LSU team. We saw every trick play, offensive package, stunt, and coverage right out the gate. They slowed us down until we figured it out and they made some adjustments and slowed us down again (after halftime), but we figured it out again. They couldn’t stop us from going on runs of 21 and 14 points. We simply played at a higher level. The work and attitude it takes to achieve this sort of success is rare. To have a roster of guys that can work together to create a season like this is unforgettable.

As we expected, LSU’s improvements in every area since the beginning of the season peaked at the right time. The defense caught up to the offense’s elite status and we played as one complete team. We held Clemson on third down 10/11 times and held them to just 100 yards in the second half. We handled every one of their weapons. Our defensive backs and rejuvenated pass rush worked together to pull Trevor Lawrence’s completion rate down to 49%. We limited the big play for the most part and with that we pulled the life sustain plug out of Clemson’s offense. Their biggest playmakers came out of the game with meager statlines and uninspiring performances (Travis Ettienne-78 yards rushing and a TD, Justyn Ross-75 yards receiving, Lawrence-234 yards and a fumble). Meanwhile, Dave Aranda and LSU’s defense ended a season of vast improvement with a bang.

At the same time, the Clemson defense that was supposed to be No. 1 in the nation in scheme and talent looked silly more often than not. They couldn’t catch Joe Burrow who manipulated the pocket as good as ever and broke free for more than 80 yards and a few crucial first downs. Our receivers made Clemson’s best DBs look silly. Cornerback, AJ Terrell, gave up more yards and as many touchdowns to J’Marr Chase as he had all season. Many an orange clad defenders were sent flying into the sideline, put on their backs, turned around, left in the dust, and embarrassed on 50/50 balls. They made offense vs defense, the most basic matchup in football, seem blatantly unfair. Our offense looked like it was just having fun out there. And as this magical season comes to an end, the sports world will forever be weighted with the question: how does one stop this LSU offense?

I’m so happy that at fourteen, I got to witness my Tigers with whom I’ve shed tears of grief and joy over the years, go and win a national championship, the cherry on top of one of the greatest seasons of all time. This team is one to be remembered.
GEAUX TIGERS!