First Ticket to the Playoff 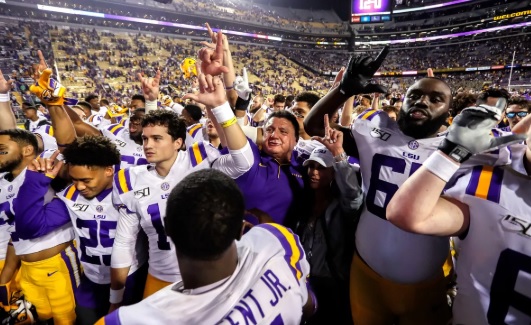 Hello Tiger fans! We stole back the number one spot which was rightfully ours in a complete 37-10 win over a top four opponent. We look like a championship team on all sides of the ball.

We made Georgia play on our terms: passing the ball and looking for big plays. Putting the ball on the ground quickly became a non-factor when Jake Fromm took a deep shot that fell incomplete on the first play. Coming out and taking a risk like this, putting them behind schedule at 2 & 10 instead of running the ball, slowing the game down, playing to their strengths, and making it 2 & 6 and then 3 & 4 before taking a more mild risk, confused me. Teams are forced to play outside of their comfort zone against us. Joe Burrow said in a post-game interview that he wonders why he even watches film on opponent’s defense anymore, instead of going in “cold turkey.” Each time teams try something completely different and exotic against LSU.

Georgia was never able to regain their rushing game once they went down by 2 touchdowns, then three, then four. Once they were playing from behind, they dug themselves into a hole with punt after punt. Our pass rush excelled against the best O-line in the SEC. Fromm was sacked 3 times on Saturday after only being sacked eight times all season. They were never able to convert when they went behind the sticks and struggled heavily on third down (3/13). When Pickens came in, Fromm wanted to throw to his best receiver but that meant throwing in Stingley’s direction. Stingley made him pay with two costly interceptions. We exposed their offensive struggles that had been only a small worry going into the game.

They came out much like Auburn did with seven people in pass coverage and a laughable three man rush. Auburn was able to pull it off with Marlon Davidson and Derrick Brown getting through double teams and putting pressure on Burrow, but this time our offensive line protected Burrow from everything. Nobody got through and Burrow had plenty of time to find an open receiver. Burrow had nine seconds to find J’Marr Chase for our first touchdown! Even when they did bring more heat on Burrow, our offensive line was able to pick it up and Burrow torched a defense that hadn’t given up more than 300 yards passing all year. You saw that even a renowned defense like Georgia’s had trouble accounting for our firepower. By trying to lockdown on Chase and Jefferson, they gifted Terrace Marshall two touchdowns and Clyde 61 yards receiving. It’s unlikely that any team in the nation could tame us.

There is something special about this team. Tiger Nation looks forward to it’s first ticket to the college football playoff.