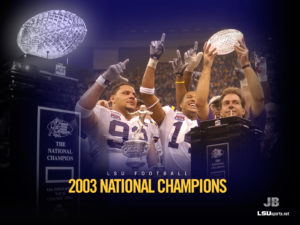 The 2003 season is the only good thing Nick Saban ever did for LSU. It was his third season as LSU’s head coach and as much as it pains me to say it, he single handedly built up a hurting program and turned it into a national championship team, mainly because Saban spends more time recruiting than sleeping. Saban recruited some of the most outstanding players to play for LSU in the 21st century, players like Devery Henderson, Dwayne Bowe, Joseph Addai, Skyler Green, Matt Mauck, Andrew Whitworth, Marcus Spears, and LaRon Landry. We had playmakers spread out on all sides of the field, but we worked together like we were one man with one job. Skyler Green would give us great field position after every one of his returns and then Andrew Whitworth and our offensive line blew up huge holes for Joseph Addai and Justin Vincent. Devery Henderson and Dwayne Bowe were one of the best wide receiver duos LSU has ever seen, but they had it made with a steady, accurate quarterback like Matt Mauck. On defense, LaRon Landry laid hits on the opponent’s quarterback that left them dazed the rest of the game. No running back could ever get around Marcus Spears. We were an outstanding team.

In 2003, we blew through almost every team in the regular season. We lost once to our bitter rival Florida who always finds a way to get under LSU’s skin even if they lose. Otherwise our defense held almost every single team to only one touchdown while our offense averaged 33 points in every game that we won. Once we easily blew out Georgia in the SEC championship we were an easy pick to play in the BCS title vs. Oklahoma. We were ready for Oklahoma and we were already in the lead 21-7 in the third quarter. We beat them like they were any other team we faced in the regular season. The final score was 21-14. At the end of the game, we had won our first national title since 1958. It gave all LSU fans hope that we were on our way back up to the top of the college football world.