Hello Tiger fans! Monday is a big day for the SEC. For the first time (in our short playoff history), two teams from the same conference are going head to head in the championship. As a college football fan in general I’m excited, but as an LSU fan it’s going to hurt seeing another team lift the trophy (especially if it’s Alabama) for the tenth year. 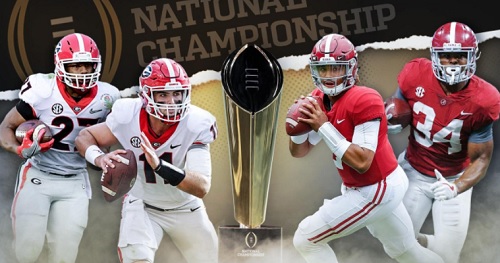 Let’s break down both the teams…

GEORGIA
A run heavy team that relies on their thunder and lightning (Sony Mitchell and Nick Chubb). They can run outside or inside very well.
They have a smart, talented quarterback, Jake Fromm, in his freshman year.
Their defense is tough, aggressive, and smart.
They are known for breaking through the line.
They have talented linebackers.
They never are counted out of a game. Kirby Smart is a good halftime adjustment maker.
ALABAMA
Also, a run heavy team with good inside and outside rushing game.
Jalen Hurts can make plays and slowly take the game away.
Their defense will slowly suffocate you until your dead. They will shut you down early.
Calvin Ridley can get open down field.
They will fake you out with body language.
They have great third down conversion efficiency.

KEYS TO THE GAME ( FOR GEORGIA )
-They go strength on strength with Alabama in a lot of ways. If they can beat Alabama in their strengths, with their strengths, they’ll win.
-Georgia’s rush defense against Alabama’s rush offense and vice versa.
-They allow only 112 rushing yards per game. They hold Alabama too that or less.
-Alabama’s backs need a few hits from Roquan Smith to slow down.
-Get to Jalen Hurts quickly.
-Create turnovers, slow down Jalen Hurts.
-Lock-down Calvin Ridley.
-Establish a rush game.