The Unforgettable Story of Brian Kinchen

Brian Kinchen was a twelve-year veteran in the NFL. Previously, an impressive tight end at LSU and a reliable blocking tight end for the Ravens, he now played mostly long-snapper on the special teams unit for the Carolina Panthers. It had been a steady decline, from a tenacious tight end to a respectable long-snapper who seldom saw the field. He was still, by any measure, playing at the highest level of any professional sport, the National Football League. 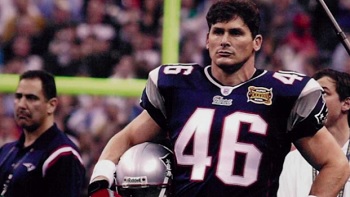 Then, midway through the 2000 season, the unthinkable happened. While playing on the Panthers special teams unit his knee was blown out. Before he knew it, Kinchen was put on the injured reserve list for the rest of the season. He hoped to jump back into the lineup as soon as he could run. Instead, he was cut from the team just a couple of weeks before completing his rehabilitation. Finally, back to having a healthy NFL body, Brian Kinchen had no NFL job.

Despite having enjoyed a lengthy football career by most any standard, football for Brian Kinchen had now become a source of distress and disappointment. He would later state when asked why he felt like a failure after 13 years in the NFL, “When you dream growing up to be an NFL star and your fortunate enough to get that career, it’s just an emotion of you always want more.”

Did his NFL career suddenly come to an end? Surely there would be plenty of other opportunities to suit up again. Perhaps a team would pick him up during tryouts before the upcoming season.

His first stop was the Dallas Cowboys. After hours of tryouts, and despite his best efforts, the Cowboys decided against signing him.

Then the Steelers long-snapper dislocated his elbow. Perhaps he’ll get a shot there. But after another tryout, he was not picked up.

Then Kinchen hears that the Broncos are looking to refurbish their special teams. They’ll surely want a look at him and he feels confident that he’s the best man for the job. Yet, for the third time, he’s turned down by an NFL team in need of a long-snapper.

So where does a falling star land when the fire is out? For Brian Kinchen it was back home in Baton Rouge as a teacher at Parkview Baptist Middle School.

Then something extraordinary happened. On December 15th, 2003, Brian Kinchen was teaching a seventh grade bible class when his phone rang. It was Scott Pioli, an old teammate from LSU currently working for the Patriots as a talent evaluator and scout. New England (the best team in the league at the time) had found themselves in desperation-mode when their long-snapper, Lonie Paxton, underwent a season-ending knee injury.

Noise erupted from the classroom. “Awesome! You gotta go, Mr. Kinchen! We’ll watch you on TV!” The morning Bible class at Parkview Baptist Middle School couldn’t have been more stoked. After all, their teacher had just gotten an offer to join the hottest team in the NFL.

A day later Brian Kinchen left for the airport with only a days-worth of clothes to get him through the try-out. If he made the team his wife would send him more.

This was certainly Kinchen’s last chance to punctuate his NFL career on his own terms. His last chance to savor the feeling of being an NFL player.  His final shot to trade a gnawing sense of regret and replace it for a grateful piece of glory that he would carry with him the rest of his life.

At the tryout he was determined to win the job and played with nothing to lose. His work paid off. Bill Belichick told him in the cafeteria in his understated, matter-of-fact manner, “Get ready, it’s going to be you.”

Knowing what was on the line, Kinchen gave everything he had in the weeks that followed. While his teammates chilled in their hotel rooms in the midst of playoff games he was in his hotel room with full gear (shoulder pads, helmet… everything) snapping a football at a pile of pillows propped up against the wall.

The Patriots kept their twelve-game winning streak going with a pair of playoff wins and punched their ticket to the 2004 Super Bowl! Brian Kinchen’s biggest moment had arrived!

144.4 million people watched the battle between the Carolina Panthers and the New England Patriots (with their third-year quarterback, Tom Brady). Brian Kinchen was on the sidelines, most improbably, as the Patriots long-snapper! This was the pinnacle of his entire career. Just a few weeks before nothing seemed further from the realm of possibility.

There were less than two minutes left and the score was tied at 29. Brian Kinchen was saying his prayers on the sideline. Tom Brady was charging down the field. The Panther’s defense was fighting that charge with all of their will.

Tom Brady dropped back and shot an arrow to tight end Daniel Graham for four yards. Bill Belichick called a timeout with fourteen seconds left on the clock. The ball was placed on Carolina’s forty-yard line. Adam Vinatieri was kicking the ball into the practice net while Brian Kinchen prayed that God would be with him in this great moment.

Kinchen had made up his mind to fire the shot of his life with every piece of his strength. “In my mind I’m thinking,” he recalled, “If I’m going down, I am going down blazing. This is going to be a rifle shot. I’m not going to be scared.”

The Pats needed a big play. They had at most two plays to get the perfect field goal shot. Tom Brady dropped back, looked down mid-field, then moved his gaze towards the sideline. He fired a perfect back shoulder pass to Deon Branch for seventeen yards. Brady signaled a timeout. The field goal unit came onto the field.

The Panthers called a timeout to ice the Patriots star kicker, Adam Vinatieri.

Brian Kinchen huddled up in the wrong spot. But no matter, he quickly reset and readied himself for, “the most terrifying moment of his life” as he would later put it. He zoned-in as time held still. All emotion held in check like an enormous dam waiting to crash down.

With everything on the line, the Super Bowl, his rejuvenated career, Brian Kinchen fired a perfect snap. Speed, timing, spiral, accuracy, all perfect. It hit the holder’s hands with a ‘smack’ and was kicked up and away by Vinatieri with a ‘thud’ and a ‘whoosh’.

As the ball sailed through the uprights, Kinchen screamed at the top of his lungs, a yell he still struggles to describe. The dam broke, it was like a tsunami washing over him with the most genuine feeling of realization of a dream and career success. Brian Kinchen was a world champion. He defeated the insane odds against him and fulfilled his dreams and prayers.

This story strikes me in so many ways. Mostly, it is that we should do everything we can to chase and fulfill our dreams. We must follow our ambitions to the farthest reaches they can take us. And never give up hope. Hope kept Brian Kinchen ready to play in the NFL even while teaching Baton Rouge middle schoolers. A faith in his own ability gave him the courage to fire the snap to win the Super Bowl. Brian Kinchen’s story has inspired me to continue chasing my dreams, against any and all odds.