Hello, Tiger fans. About a month ago, I was at my grandparent’s house and as a surprise they gave me a book. On the cover of the book was No. 31 for the Green Bay Packers, who I immediately recognized as LSU legend and NFL Hall of Famer, Jim Taylor. The book was called The Fire Within, written by Jim Taylor himself.

When I looked inside the book, it was signed by Jim Taylor as well as a letter from former Chancellor of LSU’s law school, Winston Day. Apparently, Taylor had signed it for Mr. Day some years ago. After my grandfather told Mr. Day about my blog, he decided to pass on this prized possession to me. I teared up when I read the letter from Mr. Day that accompanied this gift. I am truly blessed. In honor of this wonderful gift, I’m going to write today’s blog post about this legendary Tiger running back, Jim Taylor. 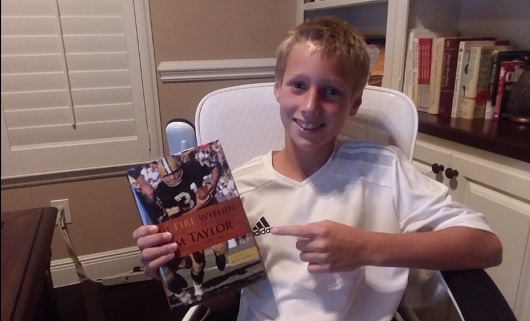 Growing up in Baton Rouge, Jim Taylor had the opposite experience as other NFL stars such as Peyton Manning or Clay Matthews. His dad wasn’t a rich former NFL great who could afford to send him to all those fancy training camps every year and serve as his personal trainer. He grew up with two brothers, Clark and Webb, and his mom, Alice, and his dad, also Clark. His dad had a crippling disease (Rheumatoid Arthritis) that limited his job choices. When the Great Depression hit, he had no job at all.

By the time Jim was ten years old, his dad had passed away leaving his mom, who had only a third-grade education, to raise the boys and work as a seamstress. That meant that the boys had to work and help support the family too. Clark and Jim had newspaper routes for the Baton Rouge Advocate, like many other teenage boys at the time. They had to deliver 200 newspapers before school started every day. After school, they had jobs selling tamales and mowing lawns.

In their free time, Jim and his brothers played sports with friends. As a freshman at Baton Rouge High, Jim played on the varsity basketball team. When a football coach saw his competitive edge, he convinced him to try out for a new sport, football. He wouldn’t see much playing time until his senior year when his talent exploded. He was All-District, All-State, and All American in his senior year. Even still, Jim received many more scholarship offers to play basketball rather than football. But his favorite school did offer him a scholarship to play football. That school was LSU. Thank goodness for that!

Once again, Jim’s talent was simmering but did not explode on the college scene until his senior year. That year Jim Taylor was All-American and led the SEC in points scored. He was drafted in the second round of the 1958 NFL draft by the Green Bay Packers. While Jim Taylor moved on to the NFL, his replacement at LSU became a legend in his own right. Of course, I’m talking about Billy Cannon.

Ray McLean was the coach of the Packers when Jim joined the team. Although he was well loved by the players, he was not a great coach. He led the Packers to their worst season in Packer history and resigned before Green Bay could fire him. On 2 February 1959, Vince Lombardi became the new head coach (you may have heard of him). He quickly made himself known. 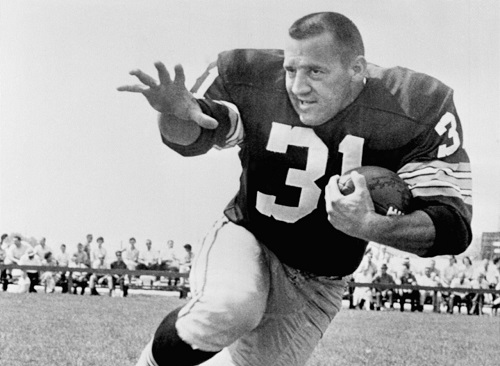 His competitiveness was another level entirely. He went as far as to switch his players’ numbers to confuse the opponent. On another occasion, he hired someone to stand at the top of the stadium taking pictures of the opponent’s formations and then throw them down to Lombardi in a weighted sock.

Jim’s eight years as a Packer, they won five NFL championships and a new championship game between the two major football leagues, a game known as the Super Bowl. After winning the first Super Bowl, Jim was drafted into an expansion team in his home state, the New Orleans Saints. His one-year stint back home would be the final note of his Hall of Fame career.

Along with rushing for over 1,000 yards for five straight years, Jim Taylor was selected to five pro bowls and won the 1962 MVP. His running style was aggressive and brutal. He hated to stop his legs. Much like modern LSU running backs Leonard Fournette and Derrius Guice, he never went down without taking three tacklers with him. And much like his coach, Vince Lombardi, he was a true winner!

This book has been one of the greatest gifts I have ever received. It opened my imagination to a different era in the vault of LSU football. I think it is important for all LSU fans to know the old heroes that set the standard for the ones to come.