One of my favorite movies of all time is Rudy. It’s a true story about a small non-athletic kid who never gave up his dream to play football for the University of Notre Dame. Even though no one in Rudy’s family had ever gone to college, Rudy forged a path to admission. Once on campus, he tried out for the football team and through hard work and grit, and a stroke of luck, Rudy made the practice squad. In his senior season, in the last home game of his career, Rudy finally got to dress and take the field in South Bend. With the clocking winding down, the crowd started chanting “Rudy, Rudy, Rudy!” The whole stadium it seems was chanting. Finally, the coaches put him into the game! On the last play, he sacked their quarterback and his teammates carried him off the field on their shoulders. What a scene, what a story!

The only thing that could improve upon an otherwise perfect movie is if the storyline took place at LSU instead of Notre Dame. One day my Mom told me a similar story about my Dad’s college friend, Korey Wales. Korey was a hard-working walk-on at LSU who had dreamed of playing at LSU since he was eleven years old. Just like Rudy, Korey lacked the physical dimensions of the typical college football player. He stood only 5’9” tall. He was a fast runner, clocking a 4.67 second 40-yard dash and had good quickness off the ball. Mostly though, he was a strong, 245 lbs. southern boy from Kentwood, Louisiana (home of Brittany Spears, by the way).

Korey held a scholarship offer from Wyoming, but his heart always belonged to LSU. So he walked onto the team as a fullback/halfback. Over the ensuing years, Korey never missed practice and always worked as hard as or harder than anyone else. During his first year, he laid a hit on defensive lineman Gabe Northern during practice that led to Gabe shouting, “Dang Rudy, it’s just practice.” The nickname stuck and Korey was always called Rudy after that day.

Even after playing hard in practice and having some of the meanest hits on the team against LSU stars such as Booger McFarland, Korey never saw the field. Each year was the same, practice hard and hope to see the field only to be disappointed in the end. He gave all his blood, sweat and tears for a dream that might never come true. 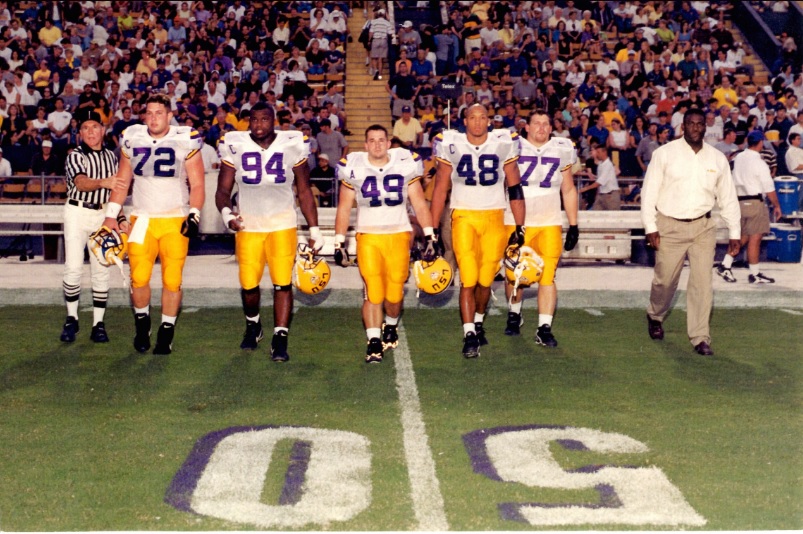 By the 1998 season, Korey was a fifth-year senior in his final year of eligibility. His work ethic never wavered. He continued to hope that this would be the year he would hit an opposing player under the Saturday night lights of Tiger Stadium. On September 26th, LSU took the field against an overmatched Idaho team. This was the last home game Korey could ever hope to play in. It was now or never.

Korey’s hopes brightened when he was named co-captain for the game along with Todd McClure, Joe Wesley, Nate Turner and Booger McFarland. The first quarter passed and he hadn’t seen the field. By halftime, same story. No action. Entering the fourth quarter, Korey was getting anxious. The game was in hand, there was no threat of losing. This had to be his moment. He hung right by his running back coach, Mike Haywood. Still nothing happened.

At this time, there were some other anxious people hoping to see Korey play. Sitting in the student section were some of Korey’s friends, a couple named Shelley and Brian. Or, as I have known them my entire life, Mom and Dad.

Mom and Dad realized that this was Korey’s last chance to play. They rallied two other friends, Leslie and Peter, and they went throughout the student section urging people to chant Korey’s name. Soon the whole student section was screaming, “Korey! Korey! Korey!” As the sound grew from faint to downright loud, Korey took notice and threw a thumbs up at my Dad. Then other players started to notice and, finally, so did LSU Head Coach Gerry DiNardo.

In the blink of an eye, Coach Haywood grabbed Korey’s shoulder and pushed him onto the field. Korey Wales, the walk-on from Kentwood, Louisiana, the practice workhorse who gave his all every single day for five years of his life, was now center stage on a Saturday night in Tiger Stadium!

If you look up the official statistics from LSU’s 1998 season, you will find Korey’s name listed under the by-line of the Idaho game. His name is officially etched into the LSU history books. Nothing can take that away. But was it worth it? Was it worth the hardships that come with playing college football, as a practice-squad scout team member no less? I asked Korey this very question during an interview I recently conducted with him. “Yes!” He replied. “Even if I had not gotten to play, it was worth it.”
Korey went on to tell me that what he gained in the process, the character development, the memories built and shared through the highs and lows of being part of a team, those are the treasures he still carries with him. They are lessons of perseverance and work ethic, of serving others to accomplish a bigger mission and to achieve victory as part of a group of committed individuals. Korey shares these lessons with his children today and says proudly that he will share them with his grandchildren in the future.

As for me, I am glad I learned about Korey’s story, it is better than a movie. It is bigger than LSU football. Korey taught me that it is the pursuit of the dream that matters most. That is where the magic takes place and where life’s most valuable treasures are gained. Treasures we carry with us long after the stadium lights have dimmed, even the bright lights of a Saturday night in Tiger Stadium.