How do we look next to our SEC opponents? 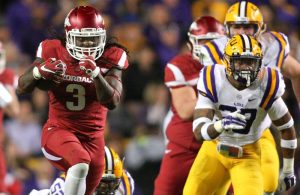 I love comparing and predicting as you’ve seen in the last few articles. I want to compare us to our possible opponents for the SEC and national titles and then give you the actual rankings from the experts.

There is always tight competition in the SEC West. You can really never anticipate what it’s going to be like. If things stay “normal,” Alabama will be our toughest rival as usual, but has there ever been a year where everything stays “normal?” Alabama, of course, did well in the spring game. Their defense was great, but they don’t have a standout quarterback. Jalen Hurts looked like their best bet but all he really has is speed and not much of an arm. Auburn, however could go the distance with their Goliath-sized quarterback Jeremy Johnson. They have some good wide receivers, running backs, and a pretty good defense. To get to the SEC title we have to improve our passing game, which has been a thorn in LSU’s side for two years. More to come on that. If we beat Arkansas, Alabama, Ole Miss, and Auburn, and my predictions hold true, we’ll be going to the SEC championship. 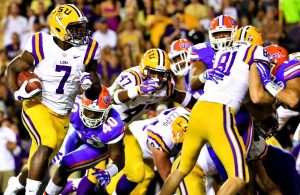 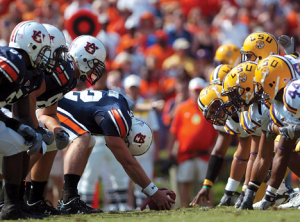 I’m not the only person who thinks LSU will be a top team. I checked the way-too-early ESPN rankings, and LSU was number six. The SEC is once again highly thought of because they made up one third of ESPN’s top twenty ranked teams. USA Today’s Danny Sheridan has Leonard Fournette happily sitting as the top person on his Heisman Watch. All we need is to beat our way into the top four. I don’t see how Clemson can stay ranked number one; they lost their defense this year and nobody wins without a good defense. I’m sure that Michigan and Florida State won’t be top five too long. Both teams were ranked highly because they got a lot of good four or five star recruits, but they lack experience. I predict we can jump ahead of them after the first game. I’m looking out for Tennessee who may be really good this year, but number eight is probably enough to handle for them. The only SEC team ranked ahead of us, as you may have guessed, is Alabama. Even though Alabama has lost all of their stars, they still somehow pushed out Clemson for the number one spot on ESPN’s list after the spring games. I think the SEC ranking will stay sort of the same except for LSU and Alabama switching places. These are way too early predictions, and in my mind you can’t judge teams until conference play begins. In fact these predictions are so way too early that for number fourteen on the 2016 Heisman Watch, they just put “QB for Nortre Dame.”