This Is What Counts! 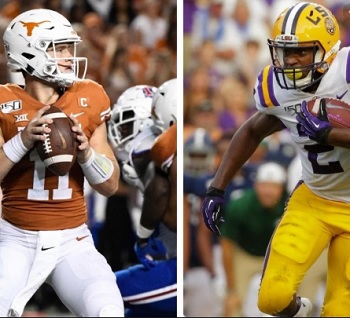 Hello Tiger fans! Last week was a heck of a season opener. Glad you enjoyed the show, but this is what counts. Every time I looked over the schedule over the summer, my eyes always glanced down to the week 2 matchup against Texas. A top ten opponent that finished the season with a big win against Georgia and now, with Sam Ehlinger leading the team again, a really hot team. It’s our season and I know we’re set to face this opponent. This is a game to make a big statement, not only that Orgeron was the man for the job, but that we belong in the national conversation.

Last week in Austin, Texas faced LA Tech and had some traditional LSU struggles against a weaker opponent. While they came out with a solid win on the scoreboard, they lost in first downs, time of possession, and had similar yardage on the gamefield. They capitalized on three turnovers. They won’t receive that commodity against LSU. This frustration compared to our jubilance gives us a little momentum going into their stadium.

Texas is saying they’re DBU? Have they handled our offense yet? I don’t think this Texas’ defense is ready for the Burrow and Brady attack. If they let LA Tech complete 35 passes for about 6 yards a pop, they can’t stop our spread, with our overload of talent. This is going to be another great game for “Spread” Orgeron. I’m sure with all the stress we’ve put on this game, Joe Brady has a bunch of new looks ready for them. They might have some dangerous blitz packages, but can they account for a quick pass to the running back out of the backfield? Our quick passing offense is hard to effectively blitz and that might give Texas’ DC, Todd Orlando, some problems. Their defensive line isn’t as strong or as deep as LSU’s, but it will be a bigger test for this offensive line we were worried about in the preseason. With Sahdiq Charles back we can win the trenches.

LSU should be taking Texas’ offense serious. With Ehlinger back and a wide receiving corps that gave LA Tech fits they have what it takes to beat an SEC defense. All the swing passes, wide receiver screens, and dumps to the running back remind me of a very effective LSU offense. Then, we have to guard the play action on every single play. Like LSU, Texas tried to conserve their quarterback as much as possible before this matchup, but Ehlinger’s legs are a huge factor that we have to account for. We might have to play it much like we did a few years ago against Jalen Hurts by keeping a DB in the box as a spy, but unlike Jalen Hurts we also have to account for his arm which can get it to all the spots. I’m excited about a real test for Stingley, Fulton, Delpit, and the rest of our DBs that will get to make a difference. But, more than anyone, the X-factor of this game will be K’Lavon Chaisson who called Ehlinger “not too much of a threat” and played high school football with him and got the best of him in a state championship. Hopefully, the narrative will be similar today.