Hello Tiger Fans! We’re are finally into the six-game stretch of SEC play that will define the rest of our season. Ole Miss is an interesting opponent to start with, and I’m glad they are the opening act.

Ole Miss is one of the more one-dimensional teams in college football, although, LSU is close behind (in a different dimension). This game reminds me of two years ago when LSU played Louisville in the Citrus Bowl. The big question: What happens when an unstoppable force meets an unmovable object? One of them has to give way to the other. The ultimate test of Offense vs. Defense.

Ole Miss has looked more phenomenal than ever in the passing game this season. In a season opener against No. 25 Texas Tech, Jordan Ta’amu threw for 336 yards and then followed it up the next week with 450 yards passing and 76 points against a lesser opponent. The grand experiment came when they played against a dominant Alabama defense. Alabama not only halted their offense, but prevented any kind of big play that breaks out of the pile every once in a while (save Jordan Ta’amu first pass that went for a long TD).

I think our defense is just as elite as Alabama’s and we could definitely shut down their offense. The thing Alabama has is maturity, focus, and consistent motivation. Our defense hasn’t been able to resist the wear and tear of our energy and focus in the second and third quarters of the game.

Our defensive line is the biggest factor to domination. Ta’amu needs time in the pocket in order to make those long passes. If Breiden Fehoko and Rashard Lawrence can keep wrecking the pocket and Michael Divinity and Andre Anthony use their speed to rush the QB, he’ll never complete a pass. In short, our plan is to make every snap torture for him. Make him uncomfortable! As long as our stellar cornerbacks can keep some of the better wide receivers in the SEC under wraps for the beginning seconds of each play, our fancy blitzes and defensive line will take care of the rest.

Another thing Alabama did is intercept Ta’amu twice. Sacks and interceptions destroy a QB’s confidence and it takes confidence to run up the score board. LSU’s opportunistic defense will have no trouble turning Ta’amu’s discomfort in the pocket into an opportunity for the offense.

On the other hand, our offense should have no trouble against one of the worst SEC defenses. Their points allowed per game are about the same as our highest score this year. Their yards allowed per game beat our yards per game by over a hundred yards. I could go on, but you get it. This is an easy matchup for our offense that has yet to obviously prove themselves.

The key to this game is to not turn it into a shootout. Anything else, and this is our 5th ‘W’.
GEAUX TIGERS! 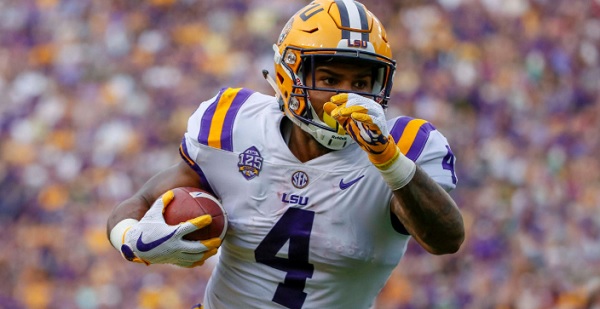