Matchup of the Century: LSU Receivers Against Florida Defensive backs 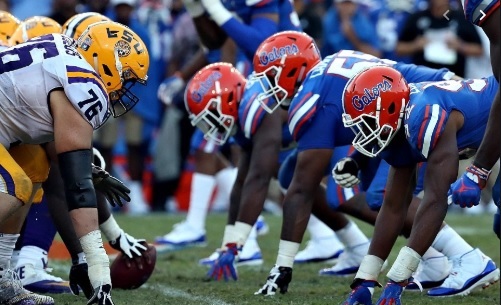 Hello Tiger fans! The attention garnered by this top ten matchup is already reaching levels of hype that we haven’t seen yet this year. As tons of big recruits for LSU are coming to witness this night game in Death Valley and the game ball is going to be delivered by a parachute squad, fans couldn’t be more excited. Both teams are coming in red hot, undefeated, with one top ten win already. Despite playing their best football through these first 5 or 6 weeks, each team will come into Death Valley feeling like they have something to prove. This is an intense rivalry that makes an exciting game every year. For the past four years we’ve traded wins and it’s been since Zach Mettenberger that the game was decided by more than a score. And one more thing, Florida has won only once in Death Valley in ten years. We have everything going for us and we’ll need it as we charge headfirst into this Florida team that we could very well see again in the SEC championship.

This Florida defense is one of the most explosive in the nation with a knack for creating turnovers and a fierce pass rush. LSU’s offense has looked phenomenal so far, but we will be tested by a defense that is just as good as Alabama, Auburn, or any other defense we’ll face. They don’t like to let teams run up the score as proven by their 9 points allowed per game. They have created 17 turnovers this year already and will look to exploit Joe Burrow and make him uncomfortable. As stated previously, putting the ball on the ground three times and throwing an interception inside our own red zone could come with different results against the Gators. With Ed Ingram and Saahdiq Charles returning, we have what it takes to match them in the trenches and let Burrow do his thing. Its his time to shine.

The matchup of the century is in our receivers against their defensive backs. Each group is electric and as strong as you’ll find in college football. Look for us to go back to full throttle offense, using every page in the playbook, but in some situations we’ll need to be able to pound it on the ground as we did against Utah State. This game will put us in every situation, much like the game against Texas, and much like Texas, when we win each of those situations like we’re prepared to do (two minute drill, red-zone, goal-line, 3rd and long), we’ll win this game.

Florida isn’t traditionally a dangerous team on offense, but over the years they’ve found ways to put points on the board against us with big plays or grinding run after run. Our run defense will be more important than ever. Kyle Trask is the backup quarterback and won’t tear us apart in the secondary. Orgeron has said he would like to stack the box and force them to be one-dimensional. Stingley, Delpit, Chaisson, Lawrence; this is a defense full of playmakers made to be the best in the highest levels of football. We proved strong against lesser competition that we can dominate the game on that side of the ball. To be dominant down the road will be much harder. I know that this defense can prove to be even better than defenses in years past.

Special teams will be crucial. Last year Cole Tracy proved he was gold, hitting a walk-off field goal against Auburn. Cade York has yet to prove he can hit a challenging kick through the uprights in the heat of battle, but don’t doubt that he will do that today or further along in the season. A Stingley punt return in a game with the type of atmosphere there will be on Saturday would be killer.

This is shaping up to be an amazing matchup and I’m excited to watch LSU come through with a win.