Holding my breath in the swamp

It will take a lot to move past last week’s loss to Troy. We have bigger fish to fry than to sulk over a crushing loss. We can’t let Troy (or Mississippi State) beat us twice. We are staring at seven straight gorilla SEC opponents that make Troy look like an ant. We are 0-1 in conference play and Mississippi State isn’t even on the top of that food chain.

With the exception of last season, Florida has had a string of bad luck against LSU. For the second time in three years their starting quarterback is hurt right before they face us. Also, tight end Tyrie Cleveland, who is arguably comparable to Alabama’s O.J. Howard, is out with an ankle sprain. LSU on the other hand will have a number of previously injured players on the field though in limited roles: Guice and Williams on offense and Lawrence and Alexander on defense.

Florida’s Freshman quarterback, Feleipe Franks, has some bad blood with LSU after committing to us and then quickly attaching to a bitter rival. I’m hoping our defense can nurse that grudge and get aggressive and alert. Being a freshman, Franks is prone to make mistakes every once in a while. Unfortunately, LSU’s defense is mostly freshman too and we are therefore also prone to mistakes. Unless we can be the defense that held BYU inside their own fifty-yard line the whole game this will most likely be a freshman vs. freshman battle with some blown coverages and some turnovers. I’d much rather be the dominant team from our season opener that can show the crowds that Franks is still a freshman while looking more mature 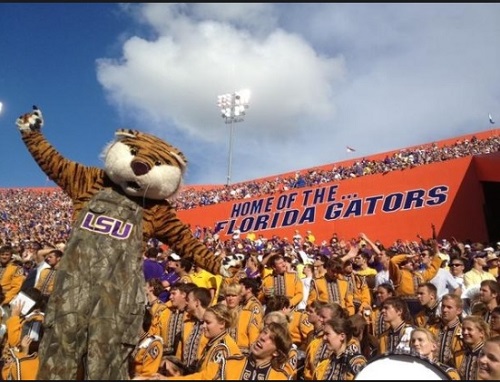 Last year LSU was embarrassed by running back Jordan Scarlett but this year a freshman running back named Malik Davis has taken the spotlight. He is hard to catch and has a way of making defensive backs grab air. If LSU can’t contain and stick to their assignments we’ll be watching postgame highlights of him breaking 70-yard touchdown runs.

Last year we got lucky and eight of Florida’s starting defense was out. This year we won’t be as lucky. Florida has a defensive line with much depth (unlike us). We could see twelve different faces lining up in front of our offensive line, each one as dangerous as the next. Their defensive backs grabbed two pick-sixes back to back versus a trained Michigan offense. Imagine what they could do if Danny Etling doesn’t play like a Heisman.

I can’t lie, I’m worried about this game. But, if LSU can pull this one out then maybe our season won’t be as bitter as we thought. No matter what, forever bleed Purple & Gold!

P.S. Where in the world is Arden Key?