Hello Tiger fans! Today, for the last time, we will analyze the opponent. When these teams roll around during the season, I want to be able to hyperfocus on LSU’s game plan.

As always, Texas A&M is the warped wall at the end of our American Ninja Warrior Course of a schedule, and usually we don’t need three tries to succeed. We haven’t been beaten by them since 1995 when they had Steve Ensminger as their coordinator (a dose of our own medicine). That was back when they were in the Southwest Conference. Now, for the first time, it seems they are making long strides to be among the big dogs of the SEC.

Firing Kevin Sumlin was probably the right move. He’s been working from down, up since he got to A&M. Despite his success coaching (as mainly an offensive coordinator) at Purdue and many other schools, he was a first-time head coach which made him a chancy candidate to start. Then he was given the task of establishing the Aggies as a power in a new conference which is not easy. 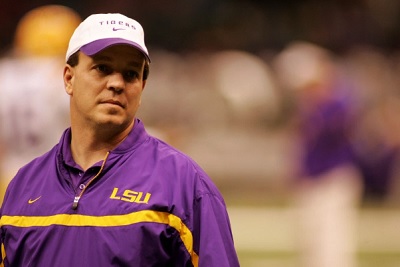 When Texas A&M went looking for a new coach they wanted someone who had lifted a trophy. Someone with a taste of national success. Well Jimbo Fisher did that at LSU and FSU and he landed the job. This is the biggest head coaching change in the SEC and that’s saying a lot for a conference with a summer head-coaching shake up of six teams.

The change is mild in the locker room. The 77th best O-line is back for more and Kellen Mond and Nick Starkel continue year two of the battle over quarterback. Trayveon Williams is still consistent and reliable, but never Heisman-worthy. Christian Kirk has left a huge void on the practice field and in the locker room, but most importantly on the score board. Quartney Davis has been the unsuspected idol of Jimbo Fisher, and there are a few receivers that will definitely get some spotlight.

It’s up to you to decide whether this is potential or not, as for Jimbo Fisher, he definitely believes. We’ve seen A&M start every season like a champion and then stumble. I think a great coach like Fisher could bring the consistency that’s key to a stellar season.