The Birth of Bébé 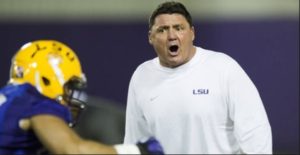 This was a busy week for our Tigers with a tight game against Auburn (severe understatement) and an entirely reset coaching staff. Later this week, the blows kept coming with Davon Godchaux arrested for domestic violence.

The first thing I want to say is that Les Miles is a great man. But as Leonard Fournette put it, “At the end of the day, it’s a business and we gotta understand that.” I want to wish Miles and offensive coordinator Cam Cameron a good transition to a team that suits them and thank them for all they did at LSU. I watched a “Mad Hatter” highlights video on DandyDon.com and it made me miss him already. He was a fun coach and a very good man. Still, our program wasn’t the right fit for Miles anymore and it was maybe time for us to find a coach that suits us better.

At this moment, our interim head coach is Ed “Bébé” Orgeron. Orgeron has had an experience just like this at USC when he became interim head coach and led them to a 6-2 record for the rest of the season that included an upset over a talented Stanford. After all the names being thrown around like Jimbo Fisher (FSU), Chip Kelly (49ers), Lane Kiffin (Alabama), Bobby Petrino (Louisville), and Larry Fedora (NC), Orgeron might stay as head coach and then we’ll find ourselves looking for a defensive line coach. As for Cam Cameron’s replacement, it’s unclear but for right now LSU’s tight end coach Steve Ensminger has the job.

Orgeron has already made significant changes, like having a coach in the box solely for clock management. He has filled out the current staff with Dennis Johnson to do the outside linebackers while Dale Peveto will only work on special teams. Pete Jenkins is helping with the defensive line. The way Orgeron takes charge makes you want him to be our new head coach. However, Orgeron can’t fix everything in six days. If you’re worried about recruits committed to LSU, like Myles Brennan (QB), Orgeron is already taking care of that. On Monday night, he called all the recruits to see if Les Miles being fired caused them to pull their commitment, but thankfully all of them are still 100% purple and gold.

As for Davon Godchaux, I understand that he was arrested for hitting his girlfriend. At first the word was that he was suspended indefinitely, but the suspension was lifted when the victim dropped the charges. We’ll see what happens. My dad says October is Domestic Violence Awareness Month and that these types of terrible things happen all too often. I agree.
Now, onto last week’s game. In my opinion, the game against Auburn showed that our quarterback situation is not our biggest problem. When Brandon Harris was quarterback, we were all thinking the sole thing we needed was a quarterback and our problems will be solved. But now that we have a quarterback who does well under pressure, we still are unable to get first downs. One problem I noticed is that when we gave it to Fournette, we got a first down but we only gave it to him sixteen times the entire game. We should have given it to him that many times each quarter.

Our offensive line was another problem. Auburn’s defensive line was no joke; they manhandled LSU which gave Etling a lot to deal with in the backfield. The last offensive problem I noticed was that our playbook wasn’t opening up enough; it was way too simple. We ran a very tight offense that had no spread whatsoever. We basically ran the same concept over and over. Our offense looked like it was either being run on a narrow street or for a pee wee football team. We also still struggled on defense with busted overages (three), but we held firm getting a goal line stand, and forcing Auburn to a field goal six times.

It may be an old topic by now but we continue to struggle on special teams. We should have blocked at least one field goal and we didn’t kick it in the end zone a single time. Although it’s no sin to miss a 51-yarder, we probably would have won if we had made it. I’ll close out with my standout players. From now on, I’m going to pick a standout player ever game.
Almost every time I looked up, it was Arden Key and Duke Riley all over Sean White. They had a total of three sacks together, while also racking up twenty tackles.

If you are still feeling down in the dumps over the way this terrible loss played out, it would help to know that somebody on Auburn’s side suffered even more embarrassment than any LSU fan. Apparently, Ashley Ward (a student photographer for Auburn) made a deal with the manager that if Daniel Carlson kicked it into the end zone she would be able to catch it. She thought wrong.