All I want for Christmas 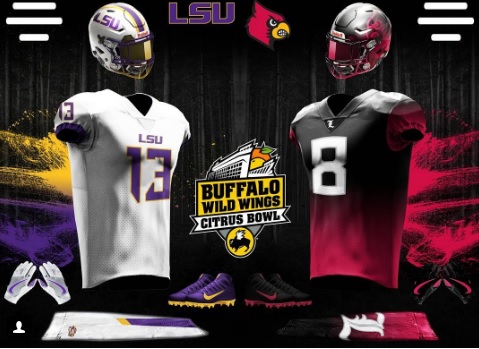 After everything this season played out, LSU ended up in the Citrus Bowl and will be playing Louisville. Auburn got the Sugar Bowl spot and Florida got to the Outback Bowl. Even though that wasn’t exactly what I wanted it to be I’m remaining optimistic that it’s still a really good bowl and we are playing this year’s Heisman winner Lamar Jackson. LSU has a chance to expose a team that was expected to be in the college football playoff many times. Aranda (who signed another contract at LSU, so we still have the best Defensive Coordinator in college football) gets a month to scheme and prepare to dominate and completely destroy their offense.

Heisman winner Lamar Jackson has been having trouble since the best player on their line, Oliver got a knee injury causing a usually very shifty QB to be sacked 11 times while also throwing three INTs in the last game vs. Kentucky. Now imagine what LSU will do with Arden Key, and Tre’davious White back and hungry. All teams that have experienced Arden Key are probably calling Louisville saying to watch out for number 49.

I think Louisville’s defense will be shredded by a heavy dose of Derrius Guice, after all they’re only known for their offense. Leonard Fournette is still struggling with his bad ankle but Coach O says he’s day to day. If we can get fifty plus points on the board against Texas A&M, then we can do it again against Louisville.

As for things going on off the field in the coaching search, LSU went hard after Lane Kiffin, the offensive coordinator for Alabama. But after being shunned by Houston, Kiffin ended up as the head ball coach at Florida Atlantic. Coach Oeaux then turned his sights to a talented up-and-coming offensive genius in Pittsburgh’s Offensive Coordinator, Matt Canada. LSU officially hired Canada earlier today and he will start coaching at LSU after the bowl game.

I wasn’t able to go to any LSU games all season because of my own football schedule keeping me in South Carolina every Saturday. But since Orlando is certainly drivable, we are making plans to go to the Citrus Bowl for my birthday! Best birthday/Christmas gift ever. Geaux Tigers!