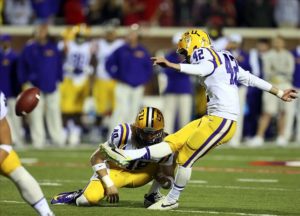 Today I just want to mention two sad things that happened over the summer that Tiger fans should know.

A few months ago Mike the Tiger was diagnosed with cancer. Before he got the treatment, his life expectancy was two to three years. A month or so after the treatment, the veterinarians say it’s possible for him to live through it; he seems to be getting better and better.

Last week, LSU’s place kicker Colby Delahoussaye participated in a place kicking camp to the in Wisconsin. He was driving to the airport with some other friends who were kickers when they came to a sharp turn in the road, wet and slippery from a previous rain. The driver lost control of the car, hit a tree, and the car fell down an embankment forty feet deep. Two of the people in the car died from the initial impact. Colby Delahoussaye was left unconscious; he woke up when he felt the car’s fire starting to burn his leg. Somehow, he escaped from the car. He reported that he didn’t know how he crawled out of the car, but most people think he had to have fallen out of the broken back window. Colby has second degree burns on his right leg and stitches on his head, along with many bruises and scratches. None of Colby’s injuries will end his career. However, I imagine he is suffering from some pretty serious trauma. I am looking forward to seeing him on the field by August 4th. Best of wishes to Colby for a speedy recovery! My prayers go out to the family and friends of the kickers who died in the accident.