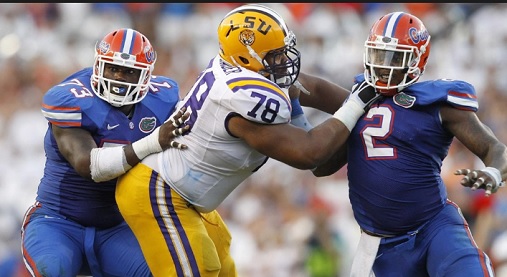 That was not what it should’ve been, no doubt about it.

We went to the swamp and got a little rattled by the pressure. Or maybe we were stunned by the aggressiveness Florida showed. Whatever the reason for our obvious unpreparedness, we never shook off a storied rival, but nevertheless, an inferior opponent. We absolutely had our chances and there is no doubt in anyone’s mind that if we were prepared and executed, this could have been an easy win. LSU’s continued lack of motivation and discipline made the loss. Florida was playing angry and, in the end, they used that energy to finish a helpless LSU offense.

After a great first drive turned seven points and a defensive stop, we were sitting pretty. We had a chance to jump on an easy 14-0 lead and bring down the Gator’s sky-high confidence at home. We could have picked up our pride and carried it over Florida for sixty minutes.

When Adrian Magee got beat by an edge rusher, Joe Burrow was quickly stripped from his blindside: halting LSU’s momentum. Later, a blocking miscommunication on the left side put Nick Brossete on the ground, five yards behind the line of scrimmage and stopped another drive. Still, a third blitz from the left side shipwrecked another drive (and Joe Burrow) inside our own red zone. Florida had the ball at midfield, but this time against a tired defense (you know the rest). The last sack of the half that came from a blitzing linebacker stopped an LSU drive at midfield before we finally got a field goal on the next drive, but a coverage bust gave Florida the ball inside the five and an easy walk-in touchdown shortly followed to close the first half.

In summary, we were shell-shocked by Florida’s blitz packages that completely demoralized our offense through the first half, and we were never able to establish our dominance in the swamp after a quick touchdown in the first few minutes.

This carried through the second half and never once did we look like we had the same drive to win like we did against Auburn despite similar situations. It was a close game, but only Florida played to win the tight game. While LSU continued to struggle against blitzes and Florida’s coverage, the Gators were doing options and double passes. LSU’s effort was an insult to the rivalry, they deserved to be taken down. In years past, LSU has done fake punts, field goal fakes, and flea flickers. This time, we slowly got beat by quarterback options we weren’t ready for, a stubborn running game, and on offense, endless, varying blitzes and Florida’s nationally respected defensive backs.
Even Still! We had the lead with ten minutes left! A team of champions wins that game every time. But we let the game out of our hands, throwing two interceptions, missing every half-hearted tackle, and playing so-so coverage.
Thank Goodness we learned those lessons before a game with much bigger stakes next week. We’ll be ready for Georgia.